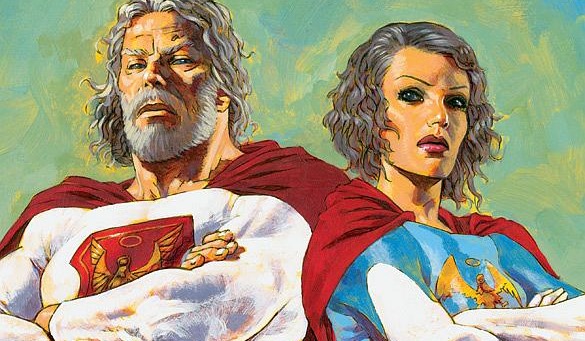 Other than Rob Liefeld I don’t know if any comic book creator has had more of a Hollywood impact than Mark Millar. He’s the guy whose comics have led to films Wanted, Kingsman: The Secret Service, Kick-Ass, and Logan. Now he’s inked a deal with Netflix that will find more of his MillarWorld comics adapted into new TV shows and films for the streaming giant.

Netflix purchased the MillarWorld rights last year, and this is the largest reveal of what their plans are for it. The included titles that will be turned into TV series and movies are Jupiter’s Legacy and American Jesus, Empress, Huck, and Sharkey The Bounty Hunter.
On the TV side, the first out of the gate is Jupiter’s Legacy, about super-powered millennials trying to live up to their parents’ amazing feats. Daredevil and Pacifc Rim: Uprising‘s Steven S. DeKnight will act as showrunner and direct the pilot. That will be followed by American Jesus, which centers on a 12-year-old kid who believes he’s the reincarnation of Jesus Christ.
On the film side, Empress is the first movie to be produced. It centers on a Queen who must flee from her dictator husband from planet-to-planet with her children. The red-hot writer Lindsey Beer (Sierra Burgess is a Loser) will handle the script. Hidden Figures director Ted Melfi will write Huck, which is aboout a boy who uses his special powers to do good; and 21 Jump Street‘s Michael Bacall will write Sharkey the Bounty Hunter.

Jupiter’s Legacy: An original series about Golden Age superheroes having kids…and those kids becoming angsty millennials. Empress: An original film about a space Empress on the run. Huck: This movie wonders if the greatest super power is just all the friends we made along the way. Sharkey: Adapted from an upcoming comic, a film about a bounty hunter. In space. Named Sharkey. American Jesus: A comic-turned-Spanish-language TV show about a boy who may or may not be the second coming of Jesus.
A post shared by NX (@nxonnetflix) on Jul 17, 2018 at 8:58am PDT

Have Your Tissues Ready, ‘Bambi’ is Getting the CGI Treatment at Disney