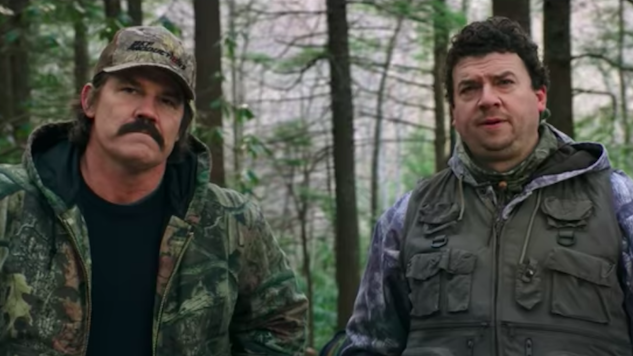 Oh, the many faces of Josh Brolin.  He has completely owned 2018 with epic performances in Avengers: Infinity War, Deadpool 2, and this week’s Sicario: Day of the Soldado. All have him playing tough guys of different kinds, but they don’t have anything on the character he plays next in The Legacy of a Whitetail Deer Hunter.

Brolin leads the latest comedy from Jody Hill, whose comedies Observe and Report, The Foot Fist Way, and HBO’s Eastbound & Down and Vice Principals all have a distinct voice. Not everybody digs Hill’s style, but with Brolin it’s an opportunity to win over an entirely new audience. The film centers on TV hunter Buck Ferguson who sets out on a very special episode with his trusted camera and estranged son by his side.

Along for the ride is frequent Hill collaborator Danny McBride, Montana Jordan as Buck’s son, plus Carrie Coon, Scoot McNairy, and Rory Scovel.  Here’s the synopsis:

Buck Ferguson (Josh Brolin), famous for hunting whitetail deer, plans a special episode of his hunting show around a bonding weekend with his estranged son, Jaden (Montana Jordan). With trusted – but hapless – cameraman and friend Don (Danny McBride) in tow, Buck sets out for what soon becomes an unexpectedly epic adventure of father-son reconnection in the great outdoors.


The Legacy of a Whitetail Deer Hunter hits Netflix on July 6th.