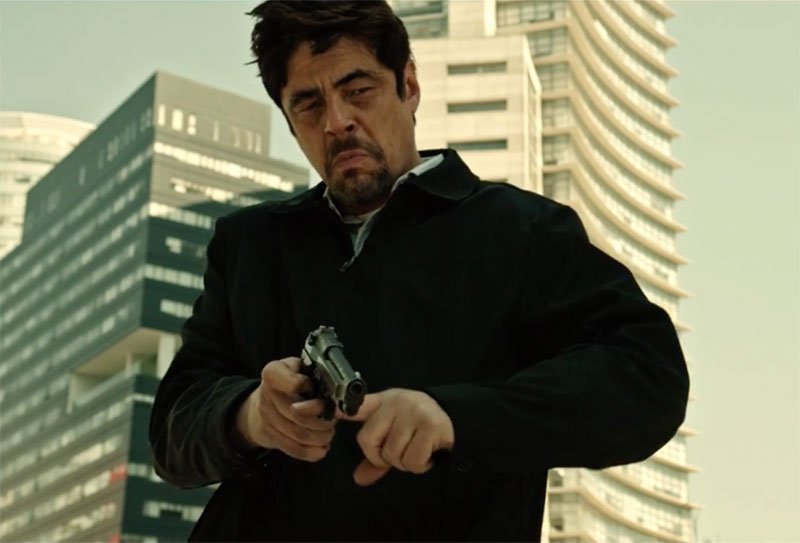 In yet another summer full of sequels, Sicario: Day of the Soldado (which translates loosely to Hitman: Day of the Soldier) is the least likely. Some would say it’s also the most unnecessary. 2015’s Sicario was a dirty-black convoy ride through the drug war, the bloody violence and murderous politics of combatting it, seen through the eyes of a naïve federal agent played by Emily Blunt. She doesn’t return for the sequel, nor do director Denis Villeneuve or cinematographer Roger Deakins, but arguably the best parts of the movie did return. That would be screenwriter Taylor Sheridan (also of Hell or High Water and Wind River), along with Josh Brolin and Benicio Del Toro as the shadowy operatives fighting that war in the cover of darkness.

The Sicario story is broadened in a sequel that feels a little too much like an attempted franchise starter, but still has enough of the cynicism, moral decay, and tense action of the first film. With Villeneuve out, Italian director Stefano Sollima steps in and does a capable job replicating the oppressive, murky atmosphere. Best known for directing episodes of the TV series adaptation of mob film Gomorrah, Sollima adopts a Traffic-style approach; quick cuts and parallel narratives. Each and every one of those narratives is as bleak as the other. A devastating ISIS-style bombing in a Kansas City grocery store has Black Ops agent Matt Graver (Brolin) on the hunt for the Mexican cartel members that helped the terrorists sneak across the border. Called into action by a bunch of stuffed shirts (including Matthew Modine as Secretary of Defense) who won’t get their hands dirty, Graver dives into the filth eagerly. His job is to start a war between the Mexican cartels so as to make them easy to pick off. To do it he brings in his “bird dog”, the ruthless mercenary Alejandro (Del Toro) to help foment chaos by kidnapping Isabela (Isabela Moner), the feisty daughter of a cartel boss, the same one that murdered Alejandro’s family.

Sicario: Day of the Soldado is almost like two separate movies. One a timely vengeance thriller penned with all of the muscular affectations we’ve come to expect from Sheridan. That film feels exactly like how a sequel to Sicario should feel.  The body count stacks even higher this time, so too does the number of black helicopters and ominous convoy journeys. Sollima and cinematographer Dariusz Wolski (The Martian) favor capturing the action from the inside; inside vehicles during crazy car chases over dirt roads; inside the helicopters stalking them down. When the bullets fly the gunfights are as slick and cool as ever, largely because Brolin and Del Toro are as cool as ice. They slide in and out of danger like ninjas, and when they get hurt it’s like a minor inconvenience.

“That’s going to need stitches”, Graver is told by one of his bosses (Catherine Keener) after a blown op.

“The good thing is I’ll still need them tomorrow”, he replies.  Tough guy! He’d have made a great Spartan.

The other, less watchable movie is Sheridan in a crowd-pleasing mode we’ve never seen from him before. There’s a certain level amount of coincidence that occurs in all of Sheridan’s films, a twist of fate that usually has disastrous consequences. It happens here, too, but Sheridan messily handles the two competing storylines, one involving a Mexican teen just making his bones within the cartel. They’re always at cross purposes so when they finally intersect, it never feels natural.  Also baffling is the hard turn towards sympathy for the most vicious character in these movies. The dynamic between Alejandro and the kidnapped Isabel is…well, it’s a little too cozy considering he’s the same guy we saw coldly murder an enemy’s entire family at the dinner table. If Sheridan wanted to remake The Professional, he should just go ahead and do that. I’d watch Del Toro in that role in a heartbeat, but it doesn’t make sense for Sicario.

Sheridan cops out in other ways that edge too close to spoiler territory. At times Sicario: Day of the Soldado is exactly what we’d want a sequel to Sicario to be. Other times it is virtually unrecognizable and you wonder why it even exists when Villeneuve’s film was so masterful. If the only reason is so we can continue to see Del Toro grimly perpetuate the cycle of violence then so be it, but we should be expecting more.