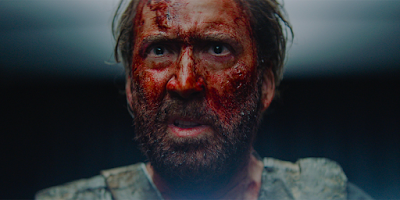 You’ve probably heard a wave of critical praise for Nicolas Cage’s performance in Mandy, the ultra-violent horror that rocked Midnight audiences at Sundance earlier this year. Well, it’s richly deserved. A film that was like comfort food to the genre crowd, it not only featured Cage going full-on Bruce Campbell in Army of Darkness, but the whole thing was directed by fan-favorite director Panos Cosmatos of Beyond the Black Rainbow fame. Those quick to brush off the film as just another lousy Cage project headed to the DVD bin will want to think again and watch the newly-released trailer.

Also starring Andrea Riseborough (who had multiple films at Sundance this year) and Linus Roache, the story follows Red and Mandy, an outsider couple living on their own terms away from society. Unfortunately that also isolates them when murderous cult leader Jeremiah Sand takes a liking to Mandy and will do anything to possess her.

While I took issue with the film’s first half which is entirely too inscrutabable for me (Beyond the Black Rainbow fans will likely dig it), the sheer gonzo power of Cage’s performance in the second half is destined to become genre legend. If you ever wanted to see him at Maximum Cage then this is it, unleashed and raw, bathed in blood and grinning maniacally. And then on a dime he shuts it all down for one of the most devastating scenes of emotional vulnerability that I have ever seen, in particular from this kind of over-the-top film. It hits you dead in the chest and no matter how crazy things get afterwards you know it’s all powered by that one moment.

Mandy hits theaters on Septemer 14th. You can check out my interview with Cage, Cosmatos, and Roache here.