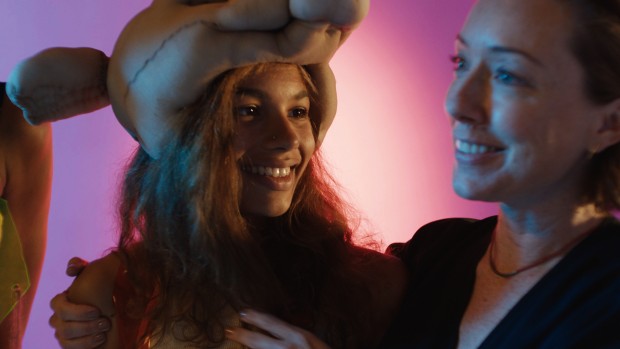 Josephine Decker isn’t a director whose name has spread far beyond the arthouse and festival crowd, but that could soon be changing. She was an indie darling with her two most recent films, Butter on the Latch and the wildly experimental Thou Wast Mild and Lovely, which if I had to boil the latter down it’d be like a cross between Joe Swanberg and Terrence Malick. After a four year hiatus Decker returned to Sundance this year and made another huge splash with Madeline’s Madeline, and a new trailer for it has been released that is as stunning visually as anything I’ve ever seen.

Exploding with colors and energy that literally rips through the screen, the film stars indie fave Miranda July (The Future), Molly Parker (Lost in Space), and young newcomer Helena Howard in the title role. I can’t do justice to the far-out plot, so here’s the synopsis:

“Madeline (newcomer Helena Howard) has become an integral part of a prestigious physical theater troupe. When the workshop’s ambitious director (Molly Parker) pushes the teenager to weave her rich interior world and troubled history with her mother (Miranda July) into their collective art, the lines between performance and reality begin to blur. The resulting battle between imagination and appropriation spirals out of the rehearsal space and rips through all three women’s lives.”