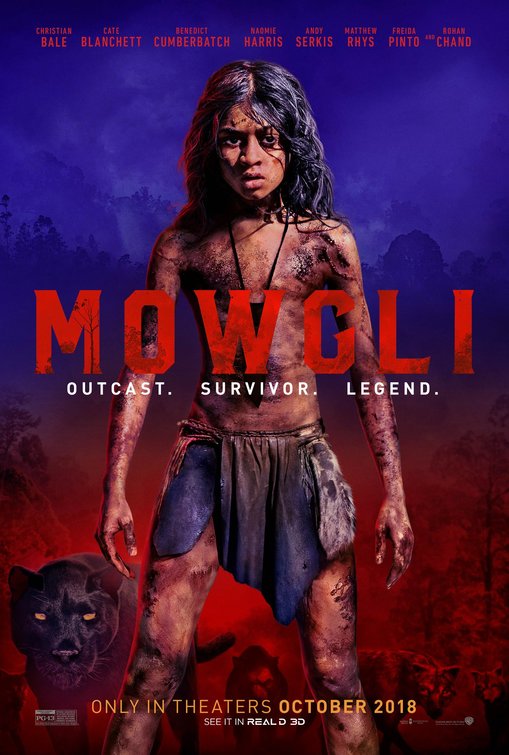 When two movies on the same subject, especially based on something as familiar as Rudyard Kipling’s The Jungle Book, the one that opens first has a huge advantage. Especially in this case when Jon Favreau’s 2016 movie earned Disney nearly $1B and great reviews across the board. That makes it difficult for Andy Serkis’ long-developing version, now titled Mowgli, which is why Warner Bros. pushed it back to get some breathing room. Will any of it matter, though? Are audiences open to the idea of two versions of the same story so close together?

The new trailer for Mowgli suggests a much darker experience completely separate from what we’ve seen before. The story will stick closer to Kipling’s book, which focuses on Mowgli’s outsider status growing up among the animals in the jungle. Here’s the synopsis:

The story follows the upbringing of the human child Mowgli raised by a pack of wolves in the jungles of India. As he learns the often-harsh rules of the jungle, under the tutelage of a bear named Baloo and a panther named Bagheera, Mowgli becomes accepted by the animals of the jungle as one of their own, except by one; the fearsome tiger Shere Khan. But there may be greater dangers lurking in the jungle, as Mowgli comes face to face with his human origins.

Serkis is best known for his mo-cap performances and the humanity he brings to them. He’ll try to do the same here, joined by  Christian Bale, Benedict Cumberbatch, Cate Blanchett, Tom Hollander, Peter Mullan, Naomie Harris, Eddie Marsan, and Jack Reynor. The live-action roles are led by newcomer Rohan Chand as Mowgli, Matthew Rhys as John Lockwood, and Freida Pinto as Messua.