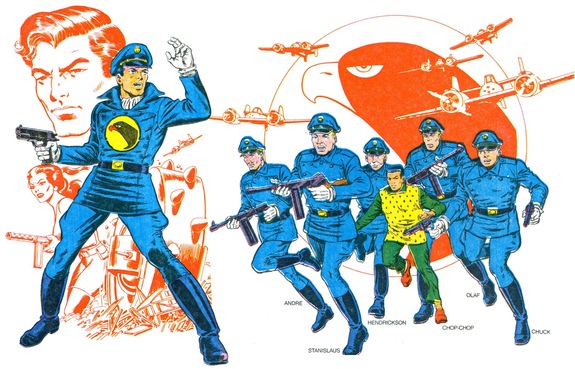 I don’t think anybody expected this news today or any day, but Steven Spielberg may be directing a DC Comics film. Deadline and other sources are reporting Spielberg will produce and potentially direct a film based on the WWII-era character Blackhawk. Spielberg will be developing the film through his Amblin Entertainment label.

So how is this happening? Turns out Spielberg had a Hell of a time working with Warner Bros. on Ready Player One, which now has $476M worldwide. He said in a statement…

“It was wonderful working with the team at Warner Bros. to bring Ready Player One to the screen. They bring a blend of passion and professionalism to everything they do and have a tremendous history in this genre. I am excited to reunite with them on Blackhawk.”


First appearing in the first issue of 1941’s Military Comics, the Blackhawks are a team of WWII ace fighter pilots of different nationalities. The Blackhawk Squadron was led by a mysterious figure known simply as Blackhawk. Most recently Lady Blackhawk, the lone female member of the team, emerges in modern times and becomes pilot for the Birds of Prey. At the height of their popularity the Blackhawks were DC’s top-selling comic book.

The script will be written by longtime Spielberg collaborator David Koepp, who will also write Indiana Jones 5.. The tone is right in Spielberg’s wheelhouse, and should make an easy entry for him into the world of comic book movies. Just how closely this will tie into the DCEU, or if it will at all, remains to be seen but I’m guessing not. Regardless this is a huge coup for Warner Bros.

‘Indiana Jones 5’: David Koepp On The Troubles Holding The Film Back