Supercon is the tale of a group of former stars of some cult
classics braving the scene at a comic convention named, you guessed it,
Supercon. Keith Mahar (Russell Peters) used to play Haji, the child sidekick of
US Marshall Tex Johnson, played by the big hit of the convention – Adam King (Clancy Brown). I
think it is fair to say that the relationship between Keith and Adam has soured
over time. Adam has let his stardom go to his head, only caring about the money
and not the fans. The person in charge of the convention,
Gil (Mike Epps), and Adam have a very profitable well-oiled machine going at Supercon. Adam
is obsessed with money and bleeding his fans dry – he charges for every little
thing and mentions money constantly. Gil and Adam take cuts from the top so
they are making quite the bankroll off of Supercon. 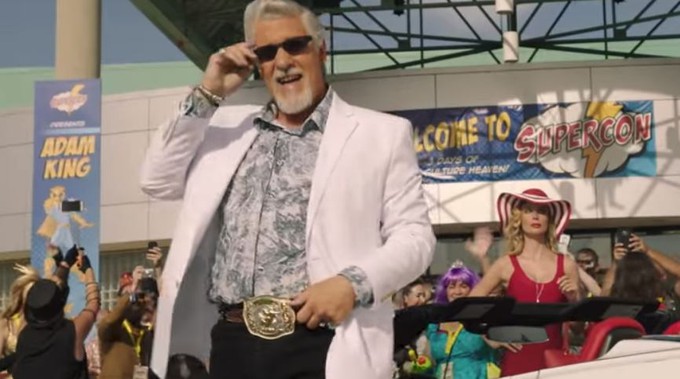 Keith can’t stand these
conventions and dreads them. Unfortunately his personal life has been falling
apart – his wife filed for divorce and kicked him out – and he really needs the
income. Even though Keith finds the whole experience belittling, often only being
known as the ball cancer boy from an infamous episode of his show, he stills
finds himself sitting at his table time and time again. Keith does have some
friends that make the conventions more bearable. All of them also have some sort
of tie with current or past cult hits. There is Wheeler (Ryan Kwanten), Keith’s cool friend that
has the lines and swagger, Brock (Brooks Braselman), and Allison (Maggie Grace). When an unfortunate incident
goes down between the group and Adam, they end up getting fired from Supercon by Gil. Gil would do anything to keep his cash cow happy, and that
includes canning the four of them. The group decides that they need to fight
back, and the best way to do so would be to hit Gil and Adam where it hurts
most – in their wallets. To pull off a robbery of Supercon, they may need help from a few more
people, but with all the bridges that Adam has burned – help might not be too
hard to find. 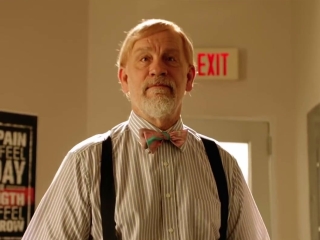 Supercon, which is supposedly based on a true story, has its
moments. I found myself enjoying some of the hijinks and absurdity that our
cast of heroes gets through. Supercon gives
an interesting insight into the backend of these comic conventions. It makes you
stop and look at what all of these cult classic stars think and feel when the
lights and cameras are off. We get to see how their lives might be after their 15 minutes
of fame are over. These characters live on and people still love them, but the
person that portrays them must go on with their lives. You hear all the time
about actors getting typecast and only recognized as the characters they
portray – Supercon dives into what
it’s like when actors are recognized and when they drift away into obscurity. Supercon looks at the world of
conventions in a truly clever way – it shows how this world differs from the
‘typical’ stereotypes we’re used to, like the jocks being losers and the sci-fi
nerds being the talk of the town. Throw in some clever cinematography and
decent humor and writer/director Zak Knutson and writers Andy Spies and Dana
Snyder have a pretty enjoyable flick on their hands. Not to mention we get some
John Malkovich time, and who doesn’t love that? Supercon has some laughs and is not the worst option for a rainy
afternoon, but keep expectations in check.
Rating: 2.5 out of 5