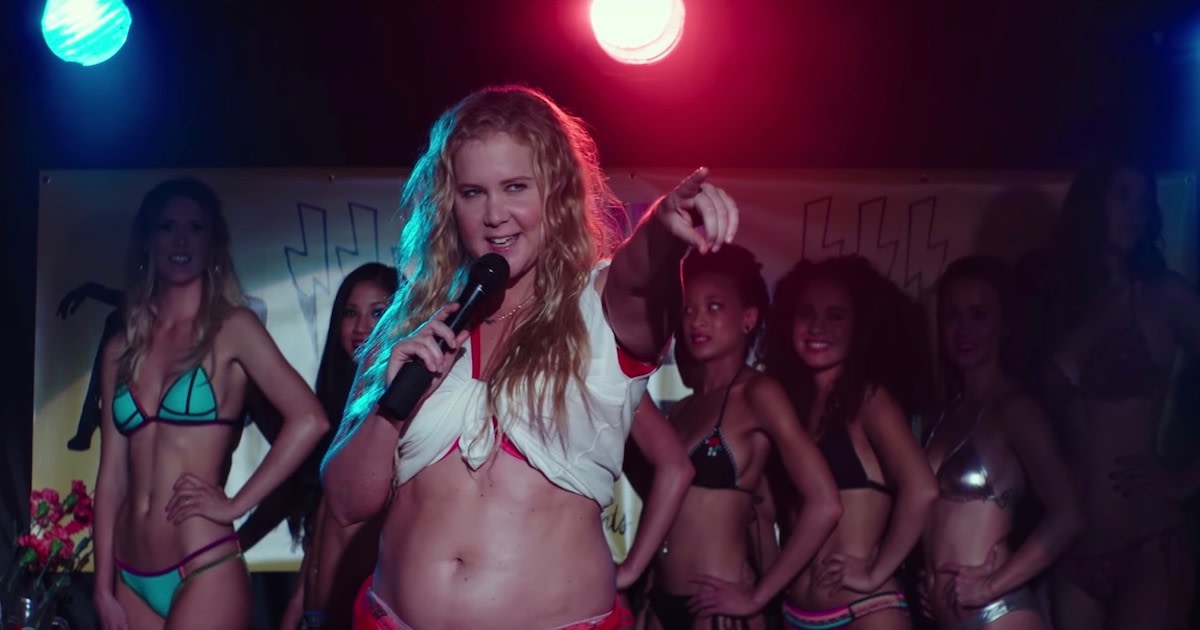 I’m a huge fan of Amy Schumer, her comedy act, her whole vibe. And that includes the body positivity that has become such a huge part of her public persona and social media profile. She should probably keep it there and not in horribly misguided movies like I Feel Pretty, a Shallow Hal-esque misfire in which Schumer breaks free from the oppression she faces for being an attractive, healthy, blonde  woman.

Schumer has been open about her body image issues, especially as she entered the world of Hollywood where being thin and attractive is everything. But I Feel Pretty is not the answer; it doesn’t even seem to know what the questions are. Despite some laugh-out-loud physical humor from Schumer and bizarre performance by Michelle Williams, the film is too shallow and misdirected to be given a free pass.

Marking the directorial debut of Never Been Kissed writers Abby Kohn and Marc Silverstein, the film stars Schumer as Renee, the life of the party when she’s with her best friends (Aidy Bryant and Busy Phillips) but suffers from poor body image and low self esteem. From the beginning this thing is off the mark, as Renee, a perfectly hea woman, is routinely treated like a wet food stamp by everyone she encounters. Why? Because she’s not pretty enough. She works as an IT person for cosmetics giant LeClaire, but is kept isolated in a glorified basement away from the beautiful models who stroll throughout the building all day. Renee’s confidence is so low she actually tries to reenact the wish-granting scene from the movie Big, hoping she’ll wake up gorgeous.

Lo and behold, her wish does come true. Sorta. But only after she hits her head during a particularly embarrassing SoulCycle class. Renee now looks in the mirror and sees herself as stunningly attractive. She literally can’t believe it. Now fueled with enormous self confidence, Renee sets out to live the life she always wanted to lead, and magically it all starts falling into place for her. New job at LeClaire as the right-hand woman to squeaky-voiced CEO Avery LeClaire (Williams), a dorky and overmatched new boyfriend (Rory Scovel), and new friends because her old ones aren’t hot enough anymore.

Yeah, she becomes a bit of a jerk. Actually, she’s a total jerk. Renee isn’t confident, she’s got an ego the size of Jupiter. But worse than that is the entire idea that she needed to sustain a traumatic brain injury to feel pretty, this woman who is conventionally attractive by just about any measure. And, as noted before, she’s a lot of fun before the incident and just as much so after. The only thing that changes is that she values others less for being what she deems unattractive, but the film wants us to see this as confidence when it definitely isn’t.

Only occasionally does the film stumble onto the right path. Renee’s boyfriend Ethan, a guy she meets by being the outgoing and quirky personality she always has been, is someone who is also dealing with self-confidence issues. She’s way too much for a guy like him but she takes him out of his comfort zone. He falls for Renee because of the person she no longer thinks she is, and their relationship has real charm and warmth as a result. It’s even cute when she takes him to a bikini contest before getting on stage for a hair-whipping, butt twerking performance that wins over the crowd.

If only the rest of the film had been about Rene and Ethan overcoming their individual problems and learning to love one another, but the script doesn’t allow them enough time. It’s also surprisingly mean-spirited; when Renee encounters a supermodel (Emily Ratajkowski) with her own self-esteem issues, her response is to say she wants to punch her in her dumb face. If the movie’s point is that only you can control how you feel about yourself then this is not the way to show it.

You can tell Schumer believes in the material and I believe her heart is in the right place. She throws herself into the role, especially the physical aspects, and remains one of the most watchable and down-to-earth actresses around. In recent days she’s begun mounting a defense against criticism that it portrays an ugly woman who magically comes to perceive herself as pretty. Um, that’s the plot. Schumer says the film is “not about an ugly troll becoming beautiful, it’s about a woman who has low self-esteem finding some… Everyone’s got a right to feel that feeling, regardless of their appearance.”  She’s definitely right, but that’s not what this movie is. Renee doesn’t just gain confidence and the ability to see herself as beautiful, she literally sees herself in a totally different body. For much of the film she does not think her friends and colleagues will even recognize her, and that has nothing to do with self-image.

The comedic highlight here is definitely Michelle Williams, whose Avery LeClaire is riddled with self-doubt because of her hilariously mousy voice. She gets some of the film’s best lines (“I thought I smelled animal products”) and wears some of goofiest, most pretentious outfits you wouldn’t be surprised to find on a runway model.

I Feel Pretty means well and is worth a few laughs thanks to Schumer’s exuberant performance, but ultimately it doesn’t look far enough beneath the surface to be truly perceptive.

‘Cruise’ Trailer: The Writer Of ‘The Wrestler’ Takes Emily Ratajkowski On A Trip To The 1980s

Review: ‘In Darkness’, Natalie Dormer Gives An Eye-Opening Performance In A Serviceable Thriller