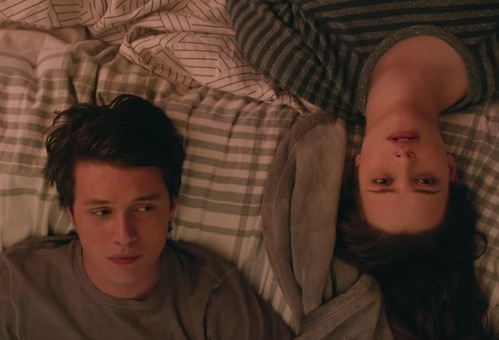 There are plenty of amazing things to say about Love, Simon, the new teen romance from Greg Berlanti, best known for DC’s Arrowverse shows. So let’s start with praise for 20th Century Fox for distributing the first major film about a gay teen’s coming out. Think about that. This is 2018, and we’ve seen plenty of movies with gay central characters. We’ve seen Hollywood ‘s occasionally awkward steps towards acceptance and inclusion. Joining the likes of Brokeback Mountain, Blue is the Warmest Colour, and very few others, Love, Simon is an essential step on that journey and among the best representations of a gay love story depicted on screen.

It’s also just a great high school comedy, full of warmth, humor, and characters you could hang out with endlessly. Based on Becky Albertalli’s book, the film stars Nick Robinson as Simon Spier, who on the surface appears to have everything a high school senior could want. He’s handsome, has a family that is intact and that he loves dearly. He’s also got a great group of friends and coffee mates in Leah (13 Reasons Why‘s Katherine Langford), Nick (Jorge Lendeborg Jr. of The Land), and Abbey (Alexandra Shipp of X-Men: Apocalypse) he has known almost his entire life. There’s just one thing that’s missing, and that’s the freedom to be who he really is. Simon has kept the secret of his homosexuality since figuring it out for himself, always playing the part of the good-looking but aloof guy at school. He’s the best friend but never any girl’s boyfriend.

When another student anonymously comes out of the closet on a school website, Simon sees someone he can finally be himself to. Also anonymously, of course. He begins exchanging emails with his new pen pal, nicknamed “Blue”, but they never reveal their true identities to one another.  Simon is just like other teens, daydreaming about his ideal match and wondering who among the people he knows might be “Blue”. When loudmouthed student Martin (Logan Miller) discovers Simon’s secret, he threatens to out him to everyone, forcing Simon to take desperate, even hurtful measures to maintain the status quo.

We haven’t seen a ton from Berlanti as a film director but one thing he excels at is fully realizing how special one’s closest relationships are. This was something he was particularly good at with the underrated Life As We Know It, and we see it again in Love, Simon. Josh Duhamel, a key figure in both movies, shines as Simon’s father and I think he probably represents a lot of dads out there who see their kids a certain way and don’t know how to react when that changes. Jennifer Garner is the most understanding mom EVER, sharing a heart-to-heart moment with Simon that is simply too perfect. Berlanti gives equal time to Simon’s family and friends, as the people in his life that he’s terrified of losing. His friendship with Leah is crucial to the person he is, while his relationships with Nick and Abbey click on different levels. Langford, Lendeborg, and Shipp are all terrific, but so are the rest of the supporting cast including The Flash‘s Keiynan Lonsdale, Tony Hale, and the hilarious Natasha Rodwell as the take-no-prisoners school musical director.

Coming out is still one of those things that requires a certain amount of bravery, no matter what your age. Think how hard it was to truly be yourself in high school, and now add a monumental revelation like this on top of it. Berlanti explores Simon’s fear and anxiety with sensitivity and heart, but also understands that there is a love story to be told here, too. Prone to just as many big, corny declarations of love and longing as any American romantic comedy, it’s refreshing to see them in a movie about a gay lead character. It’s worth noting that in the screening I attended, all of these huge romantic moments and revelations were greeted with cheers and tears (only a few by me, thank you very much) by an audience that has never had the chance to see something like this in a major studio movie before. I long for the day when a film such as Love, Simon is seen as just a terrific movie and not a groundbreaking cultural moment. We’re not there yet, but this is a damn good way to start.