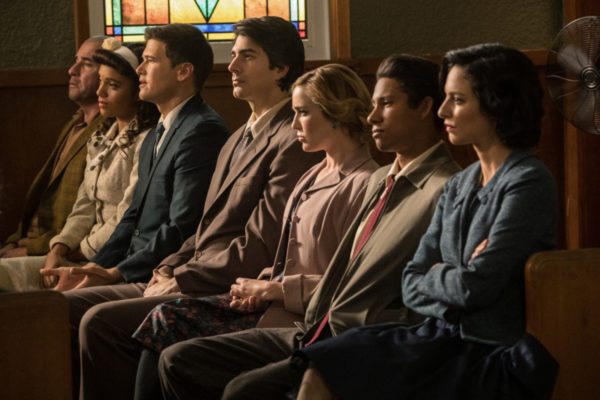 Last week on Legends of Tomorrow was a very Darhk-centric episode as we dealt with two Damiens: one good, one bad as the good version of Damien sent his daughter to the 1960s to prevent an assassination by his past self of a prominent cold fusion scientist.  This allowed both Damien and Norah to work out some deep-seeded issued between the two of them.  Once Norah worked out her issues with her father she was able to use the powers of Amaya’s totem, which means that Mallus is one step closer to escaping his time prison.

This week, however, we get a break from the Darhks as the Legends go on their own mission.  This time it’s in the Memphis in the 1950s on the eve of Elvis mania.  A young Elvis (before his big break) comes into a guitar shop in search of a musical instrument as he is about to get his big break.  The owner tries to make some small talk with him but then Elvis selects a guitar that’s “cursed” as evidenced by him simply playing on the guitar is creating power surges throughout the shop and on the street. 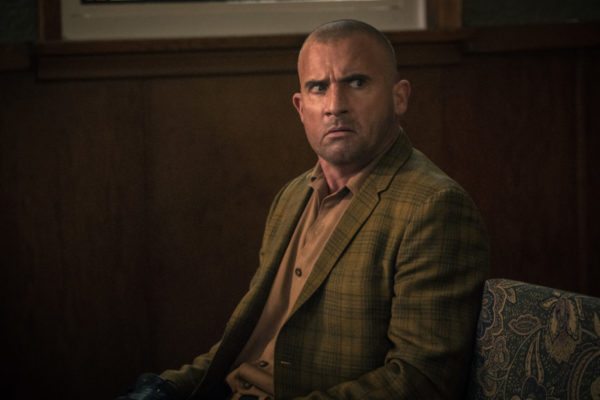 On the Wave Rider, Elvis simple playing of the guitar has created shockwaves through the timestream as the Legends are noticing small changes that shouldn’t be there.  Mick’s pet rat’s name is changed from “Axel” to “Gosh Grobin,” Zari’s “Guitar Hero” video game is instead “Trombone Hero.”  It doesn’t take them long to find out that something has happened in Memphis that stopped rock n roll from becoming the pop culture phenomenon that it is now.  According to Gideon, Memphis is a ghost town.  It’s up to the Legends to save rock n roll by helping Elvis get famous.

When they arrive at Memphis, Nate is so psyched that he’s going to meet Elvis as the Legends head to his church to hear what they think will be the birth of rock n roll.  To their disappointment, Elvis’ uncle is an “anti-Godless music” preacher and has his congregation in a fervor against this new music.  He has Elvis perform a hymn and while he is playing the guitar, Zari’s totem causes her to float in the air.  For the people in the congregation, this seems to be the work of the devil and the Legends are kicked out of the church.  Zari realizes that Elvis’s new guitar is a totem and they need to get it.

The plan is to meet Elvis, something Nate is dying to do, and swap out the totem guitar with another one.  Nate and Amaya head to a black-owned blues club where Elvis is playing at.  It’s good that the show actually showed that the history of rock n roll was started by black music artists that became popular by Elvis after the fact.  After they meet up with Elvis and do the guitar swap, Elvis bombs his performance at the club.  With the totem guitar back on the Wave Rider, the Legends think all is well, until the guitar starts flying all over the place on its own.  Turns out, this is the “death” totem and has a connection to the dead, especially Elvis’ twin brother who died when they were younger.  Elvis has a connection to the guitar as a result.  Nate realizes that Elvis needs his guitar back to record his record and help dawn the birth of rock n roll.  He convinces the Legends that it’s worth the risk. 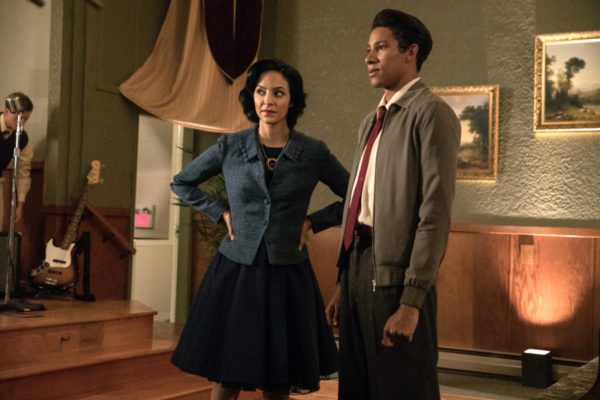 Nate, as Elvis’ “manager,” gets Elvis to record his record at a local recording studio.  All seems to be well until Elvis’ crotchety uncle storms the studio with the police getting Elvis, Nate, and Amaya arrested for indecency.  I didn’t know that a preacher can decide who gets arrested, but this is Legends of Tomorrow, stranger things have happened.  However, Zari and Wally head to the church to try and change his mind.  Zari has been breaking Wally into the team and spends most of the episode telling him that his speed powers won’t solve every problem when dealing with history.  Wally exercises some maturity and speaks to the preacher man to man and tells him his own past and his relationship with his father Joe West and how they always didn’t see eye to eye but managed to work things out.  As a result, the preacher allows the record to be played.

That doesn’t mean it’s all OK.  The son lets ghosts to rise from the dead, kinda proving the preacher correct about it being “devil music.”  As the town starts freaking out from ghosts walking around and hunkering down in the church, Nate, Amaya, and Elvis manage to escape the jail and Elvis plays music at the church calming the spirits.  He does a nice rendition of “Amazing Grace” and even gets the chance to see the spirit of his deceased twin brother.  In the aftermath, Elvis gets his props and becomes a rock n roll star.  He gives the totem to the Legends, which means they beat the Darhk’s in the totem race.  However, the episode ends with the death totem moving on its own, so all’s not well yet.