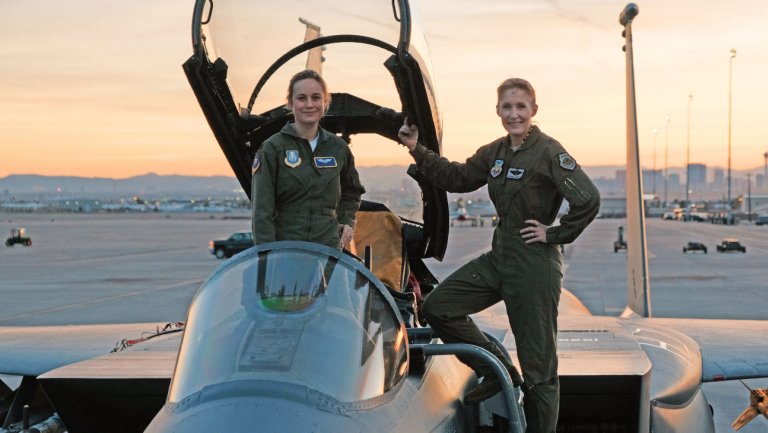 We don’t know a ton about the landscape of the MCU post-Infinity War, but we do know that Brie Larson’s Captain Marvel will be a big part of it. Marvel’s first female-led flick is an origin story set in the ’90s and centers on the superhero and an apparent encounter with other alien races. Certainly the Kree will be one of them but also possibly the shapeshifting Skrulls. We’ve seen various set photos from the movie, even one that has Larson in an odd-colored Captain Marvel costume, but the official start of production comes with a new look at Larson in the role of ace fighter pilot Carol Danvers aka Captain Marvel, as well as some surprising casting news.

The image features Larson alongside Brigadier General Jeannie Leavitt, 57th Wing Commander during a trip to a Las Vegas Air Force base for character research. Nothing huge there, but the other news is.  Clark Gregg is making his long-awaited return to the Marvel big screen as SHIELD Agent Phil Coulson, while Lee Pace and Djimon Hounsou are back as Guardians of the Galaxy villains Ronan and Korath. Coulson’s “death” in The Avengers was the unifying factor for the team, and his resurrection was seen as a major betrayal for a lot of fans. He’s been relegated to Agents of SHIELD for the last few years, but remember, this takes place long before these things ever happened.

My theory that all of this is leading to Avengers 4: Secret Invasion remains intact.