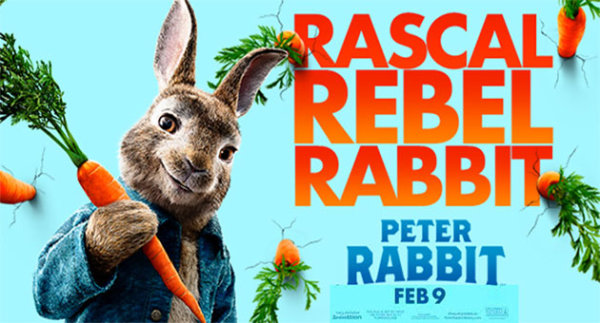 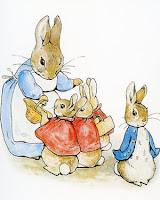 The classic children’s story of a mischievous rabbit named
Peter (voiced by James Corden) and the grumpy old farmer from whom he steals
vegetables. The beautiful images from the storybooks are seared into the
nostalgic minds of most bringing reminders of a simpler time when choosing which
crayon tasted the best was all that mattered. It’s actually sort of surprising
that this took that long to adapt, now that I think about it most recent film
adaptations of children’s stories aren’t so much the classics but rather 80’s
icons of Saturday Morning like the Smurf’s. I took my daughter to see this with
me, she’s 3 so as you can imagine that’s always a gamble but also a great way
to gauge how fun a movie is. If I’m fighting her to stay in her seat after 20 minutes,
it’s a no go. This is kind of putting the review on front street, but she sat
through the whole thing and talked about how she was Flopsy (Peter’s sister,
voiced by Margot Robbie) for the rest of the day.

The story strays a bit from the classic tale as Old McGregor
(an unrecognizable Sam Neil) has a heart attack and kicks it early on, only for
his long-lost nephew, Thomas McGregor (Domnhall Gleeson) to take over the country
manor where Peter steals his dinner. Unfortunately for Peter young McGregor has
the same prejudice to critters that his uncle had and immediately begins trying
to exterminate the rabbits. Enter Bea played by the adorable Rose Byrne, an
eccentric painter who holds the forest critters as her family with the rabbits
Peter, Mopsy, Flopsy, Cottontail, and Benjamin being her favorites. As one
might expect Young McGregor and Bea begin a romance and with that a secret war with
the bunnies as McGregor tries to rid his land of them without offending his new
lady love.

This is not a ground-breaking flick, the story goes exactly
as you would expect it to, for the most part. But it’s a kid’s flick, not Inception, so I don’t take points off
for that. The parts that matter are all in order, the film is legitimately
sweet and funny, one particular running gag about a re-routed electric fence
had me laughing far more then was probably appropriate. The visuals were
astounding, I couldn’t help but to sit and thing, “How is it that this movie
can have these flawless CG animals, yet something like Justice League ends up with a CG bad guy that looks like he’s made
of silly putty?” I’m not technically inclined when it comes to the magic of
film FX but I gotta think if you can make a rabbit look real enough then
nothing else should be that hard. Domnhall Gleeson and Rose Byrne were
wonderful as the film’s main non-CG actors. Gleeson is carving out a niche as
bad guy extraordinaire, but he got to show a little more range this time around
then he did in the recent Star Wars films. Rose Byrne didn’t deliver anything
earth shattering but she played her role as the head-in-the-clouds artist with
a heart of gold perfectly. You really have to sit back and acknowledge the fact
that these actors are acting with nothing in these types of movies to really
appreciate the complexity of their performance. I have to give some credit of
my enjoyment to the setting, the English countryside automatically merits some
appreciation points in my mind, there really is nowhere as serene. My favorite
random movie, Tamara Drewe, is
probably testament to that.

We have to give a lot of credit for the film’s success to
James Corden as the titualar hare, Peter really comes to life with Corden’s sarcastic
yet sincere delivery, he creates a real personality for Peter that jumps of the
screen and is right in line with what you probably imagined Peter to be like
when reading the books, Daisy Ridley, Colin Moody, Margot Robbie, and Elizabeth
Debicki were also wonderful voicing Peter’s entourage/family. I don’t really
have much negative to say, maybe more of a warning, but there are some dark
moments in the film that I viewed as funny but depending on what you let your
kids in on at a certain age may cause some unwanted questions. Particularly
surrounding Death, the entire premise is based off not just McGregor dying in his
garden in the opening scene but also Peter’s entire motivation is surrounding
his father being caught and cooked by McGregor. Just something to be aware of
going in, it’s handled mostly in a funny way but I can see how some would want
to avoid it depending on your child’s age.
I can honestly say I’m looking forward to July when this
movie inevitably hits Netflix and I have to watch it 357 times over a span of
three weekends thanks to my kids, or at least I’m looking forward to the first
day before it wears out it’s welcome on me.
Peter Rabbit is in theaters everywhere, Today, February 9th, 2018
4.25 out of 5