Ten years into the Marvel Cinematic Universe and finally the
Black Panther, a staple of the Avenger’s animated films that pre-dated the MCU,
has come into his own with a solo film. After blowing the doors off Captain America: Civil War with a
standout debut T’Challa is back to take us deep into the heart of Wakanda. I don’t
think I need to dive deep into the cultural resonance of this film as other far
more talented people have already done that in force, only the second black-led
superhero film in 25 years. That’s right second, poor Blade is always forgotten, not only was it lead by African-American
Wesley Snipes but it was also the first true blockbuster superhero movie,
predating X-Men by a solid 3 years.
That’s no to take away from what Ryan Coogler’s done here with Panther, while Blade featured a black man in the lead
he was, to my memory, the only person of color in sight for three movies. Black Panther takes it a step further
to show us the strongest women we’ve seen on screen to date.

The film starts shortly after the events of Captain America: Civil War with T’Challa,
soon to be crowned King of Wakanda and protector in the form of the Black
Panther, settling back into his nation and taking part in the rituals that will
solidify him as the Wakandin leader. Not long after Ulysses Klaue (Andy Serkis)
a poacher and long-time enemy of the Wakandin state is located trying to sell
Vibranium, the resource from which all Wakandin technology and wealth comes, on
the black market. Klaue is joined by Erik Killmonger (a very ripped Micheal B
Jordan) who may be more then just a lacky. T’Challa heads out with his team to
capture and punish Kalue for his crimes against Wakanda. What he doesn’t know
is that the mission to capture Klaue will lead to the rise of an unknown
Wakandin who is intent on taking T’Challa’s crown and using Wakanda’s technology
to dominate the world and punish it for what it’s done to his people.

First all, I hope the term is Wakandin, because I don’t want
to go back and change all of those entries. Second, there’s no way this movie can
live up to the hype that’s been thrusted on to it, right? For the most part wrong.
Black Panther is easily a top 3 MCU
movie and something unlike we’ve seen before. The inclusion of Wakanda almost
makes this film as eye opening and expanding on the MCU as Guardians of the Galaxy or Dr.
Strange were with their inclusing of outer space and magic to the canon. I’ll
lead with the most impressive thing about the film, the visuals. Ryan Coogler
presents a world to our eyes that’s every bit as beautiful and imaginative as
we’ve seen on screen in any movie. I challenge you to find a scene quite as
pleasing to the eye as the ancestors’s realm scenes are in this film. The care
taken in design to make Wakanda and it’s technology not just more advance but also
drastically different then anything we’ve seen is reason enough to call this
film great. It’s an easy mistake that a lot of designers make when designing
future-tech that they will make it similar to what we already know. Like how
spacehips are almost always white on the inside, or thrusters on a ship are
blue, or even how most “futuristic” designs are drastically angular. Coogler
and his team built a world that is both drastically different and strangely
familiar, the way you’d imagine things would look in an advanced civilization
that was cut off from the rest of the world. A close second for finest aspect
of the film is it’s lead, Chadwick Boseman. He IS this film. I honestly don’t
know how great it would be without his inclusion. His total embodiement of T’Challa’s
caring and regal yet fearsome persona is unlike anything we’ve seen since RDJ
took on the role of Tony Stark. All of the players in the MCU fit their
characters well, but Boseman takes it to another level. While we are on the
cast Lupita Nyong’o and Dania Gurira as Nakia and Okoye, respectively, nail
their roles as T’Challa’s longed for love and top spy (Nyong’o) and his top
military general (Gurira). Gurira has always had a solid presence on The Walking Dead but she is truly
something to behold in this film. I honestly can’t think of a single
performance that was less then great, with the exception of Michael B. Jordan’s
Killmonger in some scenes, we’ll get to that later but long story short the
issues there aren’t with the performance. 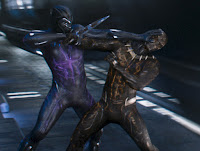 The gripes I had with the film are few and far between but if
I’m going to gush I also have to be honest and point out where it lost me. The
scenes between Erik Killmonger and T’Challa seemed oddly awkward and this
really could have been due to a large number of things. Basically, you have T’Challa
with his very reserved and regal accent and delivery talking to Killmonger who
seemed to be spouting an over the top street vernacular.  This could be just the drastic difference between
the two making it sound more off then it was, editing could have made the cuts
between the actors too fast, so the flow wasn’t there…I really don’t know what
it was, but it seemed off to me. The next was the final fight scenes between T’Challa
and Killmonger…about 70% of the fight was wonderful but when it nears the
climax and the two are really going at it on a train platform the video game
CGI look started to take over. I get that they needed to showcase the
superhuman speed and strength of the two, but I feel like a real fight scene
shot the correct way could have accomplished this and given the chance to
showcase some lesser seen but still deadly African martial arts.
All in all Black
Panther is what you’ve heard it is. The action is astounding, the
performances are top-notch, the story is engrossing, the visuals are unmatched and most importantly it
deals with some VERY real and timely themes. I don’t think it’s a stretch to
say any MCU fan will thoroughly enjoy this film as one of the top MCU
stand-alones and a really nice and well needed palette cleanser before Infinity
War hits  in the coming months.
4.5 out of 5