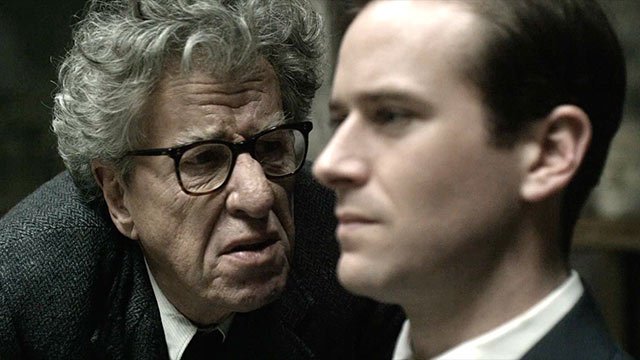 Armie Hammer is back playing an American in a beautiful European locale, only for a much different experience than he had in Call Me By Your Name. Hammer stars alongside Geoffrey Rush in Final Portrait, Stanley Tucci’s drama about the real-life friendship between writer James Lord and painter Alberto Giacometti.

Tucci’s first directorial effort since 2007’s Blind Date takes place in 1964 Paris, as Lord is asked by his good friend Giacometti to sit for a portrait that would only take a few days. The artist demands considerably more of his time, though. Giacometti would pass away shortly after their sessions were completed, and twenty years later Lord would pen a massive biography of his late friend.

FINAL PORTRAIT is the story of the touching and offbeat friendship between American writer and art-lover James Lord and Alberto Giacometti, as seen through Lord’s eyes and revealing unique insight into the beauty, frustration, profundity and sometimes the chaos of the artistic process. Set in 1964, while on a short trip to Paris, Lord is asked by his friend, Giacometti, to sit for a portrait. The process, promises Giacometti, will take only a few days and so Lord agrees —ultimately wondering “how much longer can it go on like this?”