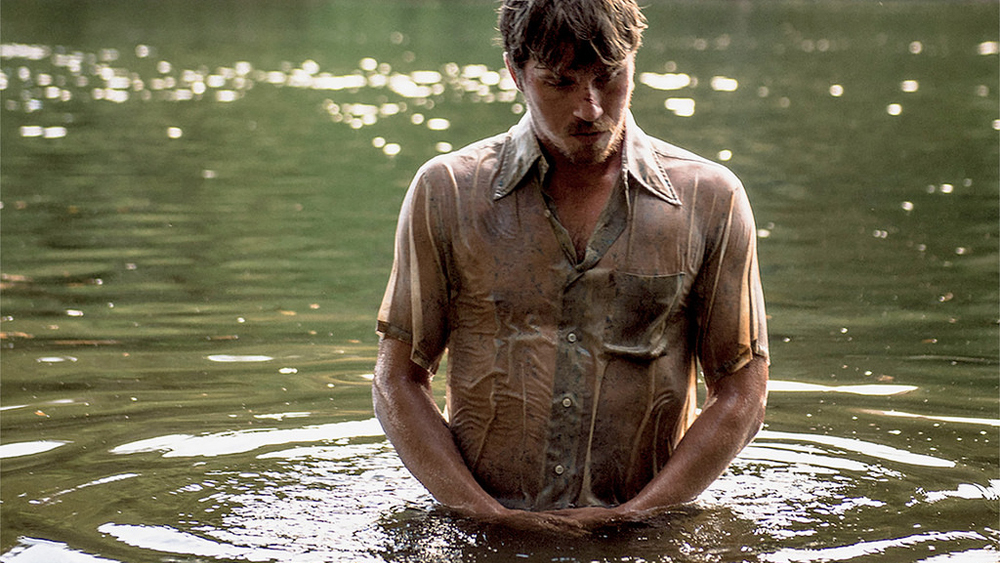 Nowadays the KKK aren’t dressed in hoods burning torches on front lawns; they’re in boardrooms and college universities carrying tiki torches. So Andrew Heckler’s comically overwrought drama Burden, which is set in 1996, feels old fashioned right from jump street. And given the real-world events it depicts some may be willing to forgive that, certainly these kinds of message heavy movies about southern racism were more prevalent some years ago. But in execution it still needs to do something new to make this particular story feel unique, and despite a couple of winning performances that fails to happen.

One of those performances does not belong to Garrett Hedlund, who as KKK member Mike Burden mumbles and sways through each scene like a drunk with a mouthful of old paper towels.  The ironically-named Mike Burden (His name immediately recalls the film White Man’s Burden) is part of a small Klan group in Laurens, South Carolina that bought an old movie theater and opened The Redneck KKK Museum. Yeah, that’s what it was actually called. Led by his father figure Tom Griffin (Tom Wilkinson, a terrific heel), Mike is a loyal foot soldier. The film begins by showing Mike and the little family of Klansmen he runs with, not as racists stoking societal fires, but as everyday folks who do normal things. Then they pull the rug out; Oh…these guys are a bunch of bigots. Got it. Guess that’s one cookout I won’t be attending.

The short hand for this movie could read as such: “KKK member finds a better way thanks to the love of a good white woman.”  That’s the wrong perspective for this movie to have. Nevertheless, Andrea Riseborough, who has four movies at Sundance this year, gives the film’s strongest performance as Judy, a single mother who rejects the racism she see’s around town. But she has an interest in Mike, and they fall in love despite his beliefs going against hers in such an extreme way. Much of the film is spent navigating their relationship, and most of it is utterly ridiculous. Too often she’ll reject Mike for something horrible he’s done or said, like use the N-word, laugh at obviously racist jokes, or beat up a black man, while holding him in her arms and allowing him to stay in her home and influence her child. It never makes sense, and her protestations, at least for me, fell on deaf ears.

More compelling than Mike’s eventual evolution is that of Reverend Kennedy (Forest Whitaker), who finds his faith tested while rioting against the museum. As a man of God who repeatedly preaches the value of forgiveness towards one’s enemies, he’s forced to put words to action when Mike, who eventually runs afoul of Tom and leaves the KKK, is in desperate need of help. At that point the Reverend must do more than put his faith in God, he must put it in men to do what’s right. It’s a choice that doesn’t necessarily sit well with his family or other members of the community.

Heckler would have been wiser to center this story around the Reverend, rather than Mike who is so distasteful that we don’t care much about his transformation. Hedlund’s unconvincing performance doesn’t help, either, which is unfortunate because Whitaker and Riseborough really do some fine, sensitive work here. But the script doesn’t allow for much beyond what the actors are able to bring on their own. Unable to really differentiate his film from others, Heckler artificially raises the stakes so often that we become numb to it. If tensions are boiling, something terrible will definitely happen. We’re meant to be “shocked” by the brazenness of the racists with such regularity (In one scene they urinate on a random girl just walking home) that they become hard to take seriously.

Heckler means well, and he makes a valiant effort to show that love can overcome hate if given room to grow. He’s also keenly aware how much economic hardship factors into bigotry, as poor white men feel compelled to exercise power over the one group worse off than them. Or worse, they act violently out of jealousy towards blacks who have succeeded where they haven’t. But Heckler makes these points without much style or grace, something the story told in Burden desperately needs.