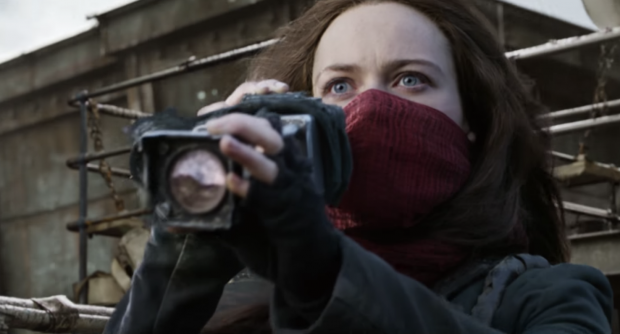 Are dystopian YA movies making a comeback? If so, Peter Jackson could be the guy to make it happen. He’s been a producer on the ambitious adaptation of Mortal Engines, based on the series of novels by Phillip Reeve that take place in a futuristic steampunk world low on natural resources.  Over the weekend audiences attending Star Wars: The Last Jedi had the chance to check out the first trailer, and now it has been made available online.

Directed by Jackson’s longtime collaborator Christian Rivers, from a script penned by Jackson, Philippa Boyens, and Fran Walsh, the story takes place after nuclear war has devastated the planet, and cities have been designed to become mobile to better scavenge the few remaining resources.  You won’t find any big names but the cast is solid, led by Hugo Weaving, Robert Sheehan, Hera Hilmar, Ronan Raftery, Stephen Lang, Jihae, Colin Salmon, and Leila George.   Here is the official synopsis:

Thousands of years after civilization was destroyed by a cataclysmic event, humankind has adapted and a new way of living has evolved. Gigantic moving cities now roam the Earth, ruthlessly preying upon smaller traction towns. Tom Natsworthy (Robert Sheehan)—who hails from a Lower Tier of the great traction city of London—finds himself fighting for his own survival after he encounters the dangerous fugitive Hester Shaw (Hera Hilmar). Two opposites, whose paths should never have crossed, forge an unlikely alliance that is destined to change the course of the future.

Box Office: ‘Into The Spider-Verse’ Captures $35M, ‘The Mule’ Surprises As ‘Mortal Engines’ Breaks Down