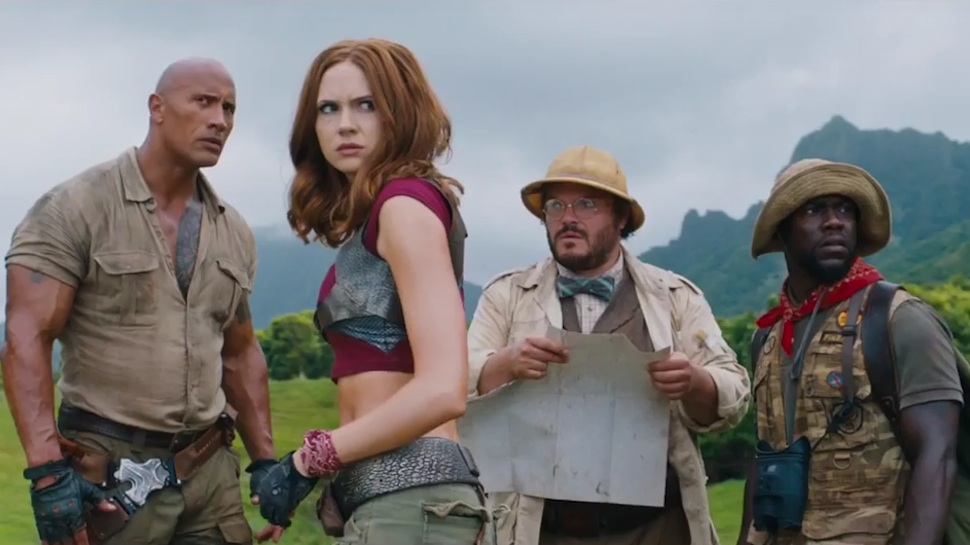 1. Star Wars: The Last Jedi– $68.4M/$365M
A 69% drop wasn’t enough to knock Star Wars: The Last Jedi from its Porg perch. It still lost $151M between weeks one and two, which is, unfortunately a new record. But who cares when it has already banked $745M worldwide?
2. Jumanji: Welcome to the Jungle (review)- $34M/$50.6M
Sony’s Jumanji: Welcome to the Jungle opened on Wednesday and scored $50M over the rest of the week. A sequel to the beloved Robin Williams film from 1995, this one has the muscular presence of Dwayne Johnson, along with box office winners like Kevin Hart, Jack Black, and Guardians of the Galaxy’s Karen Gillan. So can we add this to Johnson’s growing resume of rescued franchises? I think so. For reference, the original opened with just $11M before legging it out to $100M domestic and $262M worldwide, but those were very different times.
3. Pitch Perfect 3 (review)- $20.4M
The Bellas end their tour with a solid $20M debut for Pitch Perfect 3. The third and supposedly final movie in the aca-all girl comedy franchise finds Anna Kendrick, Rebel Wilson, and the gang reunited, but expectations were much lower for Universal this time, hence dropping it on the busiest weekend of the year. The first movie was a surprising hit, but a modest one with $115M worldwide, while the poorly received sequel blew up with $287M. Nobody was expecting those numbers this time, but matching the original is still well in reach. And I suspect that if it does fairly well a reason will be conjured up to do a fourth movie, or perhaps a spinoff with Wilson’s Fat Amy character.
4. The Greatest Showman (review)- $8.6M/$13.1M
There may not be a project better suited to the multi-talented Hugh Jackman than musical larger-than-life musical The Greatest Showman, but audiences didn’t seem to care. They just want to see him as Wolverine, apparently. The vaudevillian P.T. Barnum musical biopic opened on Wednesday wrapped up the week with a scant $13M. I don’t know what Fox’s plans are for an international rollout but they might want to come up with something. I quite liked the film a lot and hope to see it succeed, if only so that Jackman can keep doing what he loves, and isn’t forced into more traditional boring roles for the rest of his career.
5. Ferdinand– $7M/$26.5M
6. Coco– $5.2M/$161.3M
7. Downsizing (review)- $4.6M
Alexander Payne’s sci-fi/comedy Downsizing slipped onto the schedule this week and was largely overlooked. Downsizing, which stars Matt Damon and possible Oscar contender Hong Chau, opened with just $4.6M, which is much smaller than Paramount must have been hoping for. On the plus side, there may an Oscars bump for Chau, and let’s not forget that Payne’s The Descendants hit $80M domestic and $177M total after a similar start.
8. Darkest Hour (review)- $4.1M/$6.9M
It only took five weeks but Darkest Hour, which features Gary Oldman as Prime Minister Winston Churchill, expanded to over 800 theaters for a $4M weekend. That’s not huge, but with Oldman the likely frontrunner for Best Actor there should be a significant increase in the coming weeks.
9. Father Figures– $3.2M
I feel like the same thinking that went into the unceremonious dumping of another dreadful Owen Wilson comedy, last year’s Masterminds, went into the release of Father Figures. The Owen Wilson, Ed Helms, Glenn Close, and JK Simmons comedy about a pair of idiots looking for the father they never knew opened to just $3.2M. Like Masterminds, the starry cast doesn’t mean shit when the movie is atrocious, and distributors are so embarrassed they tuck the release into the most crowded weekends possible.  The hope is that nobody will notice it, that part of the plan has worked swimmingly, and then people will see the cast and perhaps rent it on VOD to pass the time.
10. The Shape of Water– $3M/$7.6M