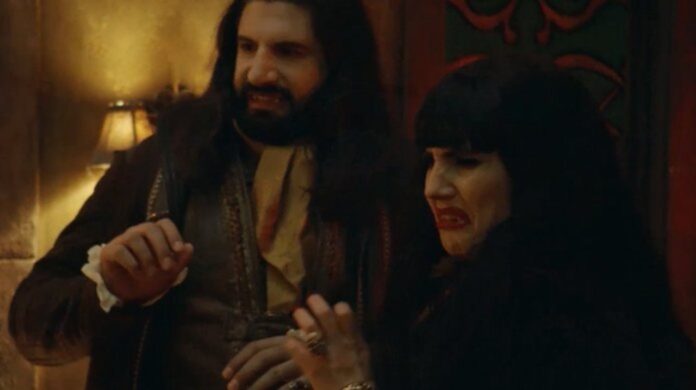 One of my many regrets is that I’ve still failed to watch Taika Waititi’s What We Do in the Shadows, either the TV series or the movie it’s based on. Apparently, I’m missing out big time on both fronts because everybody I know swears on them. Other than the hilariously fun exhibit at Comic-Con my exposure is pretty low, but one thing I keep hearing about is the Energy Vampire, Colin Robinson, played by Mark Proksch.

Colin gets some of the biggest laughs in this new trailer for season 2, as he discovers the best way to drain energy is buy telling really bad jokes to large groups of people. The other vampires do their best to fit in to the outside world, either by singing lewd songs at Open Mic Nights, attending football parties, and other silly things we know are doomed to fail.

SYNOPSIS: What We Do in the Shadows follows four vampires who’ve “lived” together for hundreds of years. In Season 2, the vampires will try to find their way in a world of human Super Bowl parties, internet trolls, an energy vampire who gets a promotion and becomes drunk on power and of course, all the ghosts, witches, necromancers, zombies and shadowy cloaked assassins who roam freely in the Tri-State area.

Season 2 of What We Do in the Shadows hits FX on April 15th.