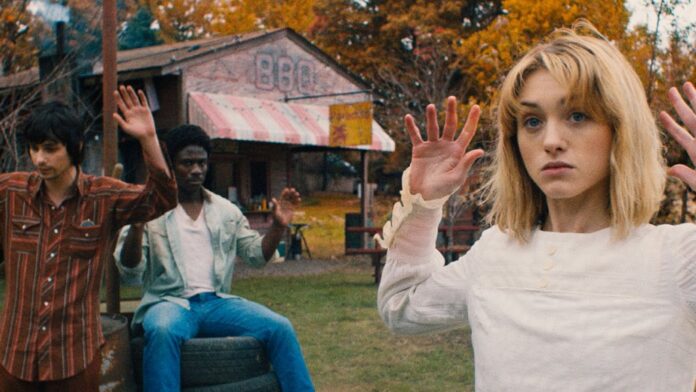 A typical movie has a runtime between 90 and 120 minutes. Most come in around 110 and what directors decide to do with that time can make or break a film. In the new film Tuscaloosa, director Philip Harder makes some really interesting choices on the film adaptation of W .Glasgow Phillip’s 1994 novel. However, when you adapt a book that was praised for its intricacies with heavy source material, such as race and mental illness, you need time to execute those things. Despite a well-meaning cast and innovative inclusion of music, Tuscaloosa struggles with its messaging amid a crowded script.

It’s 1973 in Tuscaloosa, Alabama. Segregationist George Wallace is still seen as a hero to many of the white townspeople and there is unrest between the police and the town’s black citizens. Billy (Devon Bostick, Okja) is fresh out of school, working as a gardener at his daddy’s mental hospital (Tate Donovan). Disillusioned and hiding from the world with big sunglasses, Billy seems to be waiting for his life to begin when he meets Virginia (Stranger Thing’s Natalia Dyer), a sweet yet witty patient of his father’s. As they begin to spend time together, Billy’s desire for more out of life away from his father becomes clear. Meanwhile, Billy’s childhood friend Nigel is struggling with his own identity as a black man in a white town and starts to question his relationship with Billy despite their mothers’ closeness and mysterious deaths. All these elements reach a head at the end of the Summer when Billy has some decisions to make.

If this movie was made in the 90’s it would have been a hit. It’s got everything Oscar-bait movies in the ’90s had.  A young white boy, about to step into his father’s legacy, racial tensions, a young pretty girl with mental health issues who borderline the manic pixie dream girl troupe without crossing it.  Cliché dialogue, racial discrimination as a subplot, a love story between a young man and a mentally ill girl, coming of age. It’s all there and would have thrived with a nineties audience. However, in 2020, 25 years after the book was published, some of its ideas have been before. This is seen in the dialogue, with trite lines like “You’re either part of the problem or part of the solution,” and “Nothing will break you. Nothing will break you like loving a crazy person.” Daniel Craig received a lot of flack for his flamboyant accent in Knives Out last year. Imagine an entire movie, where every character talks like that and then says things like, “Sometimes you’ve got to destroy a town to rebuild it.”

The film is beautiful to look at and captures the warmth of the south, despite being filmed in the mid-west. Harder uses his past experience directing music videos to elevate the film’s score and as an immersive tool. Treating the soundtrack like a character itself, the pieces used feel timeless and build upon its mood flawlessly. Tate Donovan, a character actor known for The O.C. and Love Potion No. 9, is refreshingly subtle with his performance as the racist overbearing father. Natalia Dyer does her best to stray as far away from Nancy Wheeler in Stranger Things, as possible but ultimately overplays her, not giving the character the nuance she needs.

Overflowing with cliché Americana and overstuffed with ideas, the film has great potential. With a strong soundtrack and endearing performances from Bostick and Donovan, you keep watching even though you will ask yourself, “where is this going?” It’s a shame that they couldn’t focus on one or two threads instead of the whole sweater.