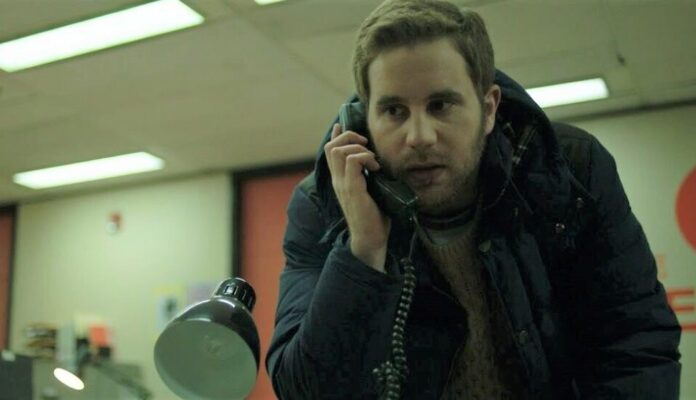 An emerging political scandal in Toronto 2013 seen through the eyes of young staffers at city hall and a local newspaper.

Ricky Tollman’s independent feature Run This Town is one that has great ambitions. A large portion of it plays out similarly to Adam McKay’s The Big Short in that it is full of quick-cut editing styles and feels like a black comedy documentary more than anything else. The style on display here, while not unique and somewhat tired at this point, did work well for the type of movie that Tollman was going for. Sadly, the technical elements on display here are some of the strongest aspects of Run This Town.

That’s not to say that the film doesn’t have anything going for it besides its in your face editing, because it does. For the first act, the script does set up some genuine tension and intrigue with its politically charged story centered around former Toronto mayor Rob Ford (Damian Lewis). We don’t really see him that much in the movie as Tollman tries to save his appearances for the right sequences. While the story is in relation to Ford, at its core, this film is about this group of young journalists that get caught in the messy web of a humongous scandal.

For the most part, the lead characters that we follow don’t get a whole lot of development along the way. They don’t even have arcs. They can only be interesting once the film’s second act kicks into place, as that is the section of the movie in which these people feel like they need to take action with this scandal. They feel like it is their responsibility to do something about it.

The person that feels the strongest about this story and wants to get it out there the most is Bram Shriver (Ben Platt), who works for an entertainment company called The Record. As an employee there, he feels like he doesn’t have a lot of room to grow. He feels like he isn’t sure if he wants to keep doing what he is doing there because all his job lets him do is publish the top ten list articles, such as the “Top 10 Best Burgers in Toronto”. While he appreciates the work that they give him, he knows deep down inside that he can do much more than write articles like that. He wants to be taken a bit more seriously. He knows that he is capable of writing much more than just top ten articles. Watching his story unfold was easily one of the best elements of the film.

Speaking of Bram, he is played with a sense of raw power by Ben Platt (Pitch Perfect, Billy Lynn’s Long Halftime Walk). Platt feels intentionally reserved and quiet as the character, but feels totally invigorating and enthralling whenever he needs to be. Looking at his acting on display here was quite intriguing, as it felt like at any moment, he could explode and reach his breaking point. It was fascinating.

I really wish I could say that the rest of the movie was as fascinating as Platt’s performance (and all of the other performances, too). What makes this film greatly suffer is, unfortunately, its screenplay. Clocking in at ninety-nine minutes, Run This Town feels significantly shorter than it should have been. The script throws so many philosophical ideas and themes towards us and tries to see if it will all stick. It doesn’t. They only chose to focus on some of the most surface-level themes, where there should’ve been focusing on the other plotlines they teased along the way.

It’s story is told in a disappointingly sloppy way and, for a long while, it feels like it is never going to go anywhere. There are simply way too many scenes of characters talking to one another without ever progressing the plot along. The first act feels like a set-up for the following two acts, which is totally fine. The problem is that the following acts don’t do a good enough job of resolving the conflict that was set up earlier.

As a result, we have a movie that feels half-baked and lackluster in the grand scheme of things. If the script had spent more time trying to develop the characters a little better and focused more on making this story feel more juicy and deep-cutting, it could have been a greatly entertaining drama.