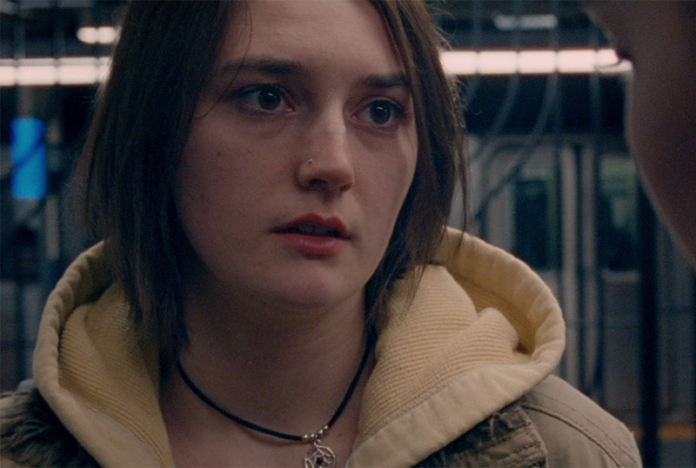 When we first meet Autumn (Sidney Flanigan) in Eliza Hittman’s stirring, intimate, and infuriating Never Rarely Sometimes Always, she’s singing a melancholy tune at a high school talent show. The song, seemingly about a boy (man?) who has made her do something she doesn’t want to, is broken up by teenage heckler. “Slut”, he shouts, to the amusement of his male friends. Meanwhile, Autumn’s family pretends not to hear. She stumbles momentarily, then forges ahead, more determined than ever to get these feelings out.

Never Rarely Sometimes Always is the latest stunning film from Hittman. Her previous two films, Beach Rats and It Felt Like Love explored with raw sensitivity the confusion that comes with teenage sexuality. She continues that trend, albeit with commentary on the pathetic state of women’s reproductive rights and the unnecessary hurdles one must face to exercise them. These roadblocks inordinately impact women of lesser means, especially those living in conservative states. But there’s little respite to be found in the big cities, as well, just different obstacles to be overcome.

Hittman doesn’t bother to spell everything out for us. Trusting us to get it ourselves, we can already tell that Autumn has it pretty rough. Her father is a dick, her mother wants to pretend nothing is wrong, and it’s only about to get worse. A doctor visit confirms the terrible news; Autumn is pregnant. The woman at the clinic fills her head with words like “beautiful” and “magic”, but to a 17-year-old girl it doesn’t feel that way. Autumn goes home and gives herself an impromptu nose piercing, the pain a distraction as much as a desperate bid for physical control.

Autumn lives in a small, blue-collar Pennsylvania town. There’s not a lot of help out there for a girl like her, especially one seeking an abortion. The nurses at the clinic definitely aren’t any help, in fact, they’re an active opponent, although veiled in flowery, seemingly helpful language. When Autumn starts punching herself in the stomach, things are already starting to look bleak. Fortunately, Autumn has one champion in her corner, her cousin Skylar (Talia Ryder), who agrees to make the bus trip to New York City to visit an abortion clinic. There, she can get the procedure and nobody back home need to be the wiser.

Hittman contrasts the stifling nature of Autumn’s conservative home with the freedom of the big city. New York is like another world for Autumn and Skylar, a place of opportunity and dreams. But is it so for people like them? Their troubles don’t cease because they crossed state lines. The abortion procedure still seems designed to be as troublesome as possible. It takes days to complete, meaning one must be able to afford the trip there, as well as find days of lodging. The actual abortion becomes secondary to basic needs of survival, and soon New York becomes a daunting, gigantic place full of dangers. When you finally learn where the movie’s title comes from, it hits you out of nowhere like a kick to the gut.

All of this is presented in sobering, unsentimental fashion by Hittman, but that’s not to say the film is free of judgment. On the contrary, it’s clear exactly where Hittman stands on the issue of abortion rights. Frankly, we need more filmmakers like Hittman who are unafraid to take a stand. By telling stories that reflect our reality, it’s one of the most effective ways to incite change. And Never Rarely Sometimes Always is a film that demands for things to change. It doesn’t do it with rage and fury but in one woman’s quiet, harrowing, and heroic struggle.

Review: ‘Selah And The Spades’