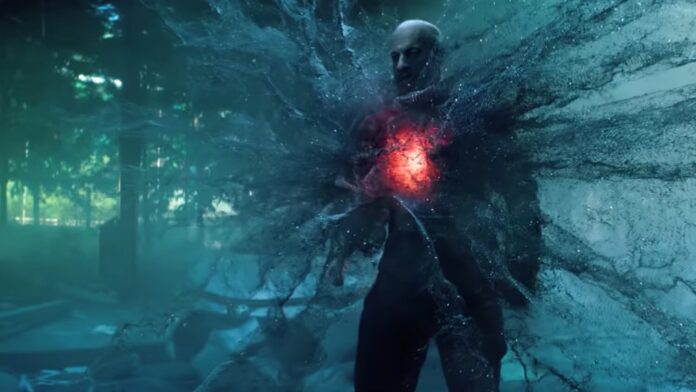 If trying to launch a brand new superhero cinematic universe, Sony could’ve done worse than Bloodshot, a character whose origin story is basically a ripoff of Robocop and Wolverine. The Valiant Comics hero with the nanite-powered healing factor, superhuman strength, and superhuman bout of amnesia gets a surprisingly enjoyable B-level sci-fi actioner led by Vin Diesel, who finally gets to appear on screen and not simply voice a talking tree for Marvel. Whether Bloodshot is powerful enough to launch a franchise…well, not even his sturdy muscles are quite that durable.

Bloodshot has a familiar story of revenge, pumped up with cool sci-fi visuals by director Dave Wilson in his feature debut. There are also a bunch of wildly exaggerated performances, keeping the film firmly rooted in trash cinema territory right where it belongs. Screenwriters Jeff Wadlow (of Kick-Ass 2 and Fantasy Island “fame”) and Eric Heisserer (Arrival) don’t even bother to put up a front; the entire first leg of the movie is one ridiculous cliche after another. Vin Diesel plays Vin Diesel…er, Ray Garrison, a U.S. soldier on a rescue mission in Cambodia. He’s a one-man-show gunning down the enemy like something out of a video game. He saves the day, and just wants to come home to spend an Italian vacay with his beautiful wife Gina (Talulah Riley).  Only she winds up being kidnapped by goofy serial killer Martin Axe (Toby Kebbell), who dances to the beat of “Psycho Killer” before offing his victims. Ray is captured, too, and can only watch while Gina is murdered in front of his eyes. Axe then turns and finishes off Ray, as well.

The end? Hardly. Keeping up with the Robocop theme, Ray wakes up in a top secret facility led by Dr. Emil Harding (Guy Pearce, hamming it up), who tells him he’s been souped up with nanobots. The little buggers give Ray enhanced sealing, super-strength and durability. He’s just one of a few other cyber-goons in the facility, former soldiers equipped with advance tech. Only one, KT (Eiza Gonzalez), seems to have much of a soft spot.  That’s because she knows the truth; that Ray, whose tragic memories keep forcing him to hunt down his wife’s killer, is being used by a much deeper conspiracy.

If Bloodshot played it grim and straight, it would be pretty unbearable. Fortunately, the whole thing is rooted in fun and some slick visuals, the best of which finds Ray tracking Axe down in the middle of an empty tunnel in Hungary. After causing a huge wreck involving a flour truck, the landscape takes on the pallor of a blood-red snowstorm. While the laser scopes track and the bullets fly, we also get a look at the full extent of Ray’s newfound powers. A shotgun blast literally tears his face from the skull, but the nanobots rip the flying skin right back into place. Ray barely misses a beat before taking the shot that kills his target.

Unfortunately, there aren’t enough scenes done so well. A climactic battle that sees Ray battling his cybernetic bros while falling down an elevator shaft is rendered in cartoonish CGI. The character models generally look pretty good, but are hardly anything to write home about. Again, they seem to be pulling from the Robocop playbook…the recent remake, that is, in terms of the visual feel of Bloodshot‘s world.

Diesel basically gets to play himself here, as Ray isn’t so much a character as a means for Vin to punch holes in walls and shout his feelings. There isn’t much to Ray that we are given reason to care about, and no amount of twisted mind-fu**ery can change that. Fortunately, Bloodshot doesn’t demand a lot from Diesel other than to hit and shoot stuff, and there are others who help to keep it interesting. Pearce is an old hat in exactly this kind of sci-fi lunacy (remember Lockout?), while Lamorne Morris is a riot as the chatty tech genius with the comic book name, Wilfred Wigans. Gonzalez also does more with the KT role than the script affords her, giving us one of the few characters with a sympathetic angle.

Chances are Bloodshot will come, go, and be celebrated only by Diesel’s hardcore fans. Interestingly, for all of Sony’s desire for a cinematic universe, there is virtually no world-building. Larger aspirations would be too much to put on this movie’s shoulders, anyway. While hardly as entertaining as when Diesel lives his life a quarter-mile at a time, Bloodshot is brawny and silly enough to avoid being a wreck. 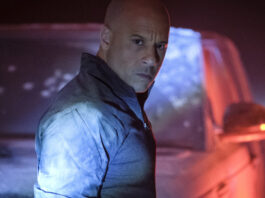 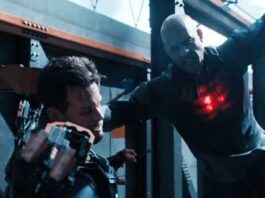 Podcast: Talking BLOODSHOT, THE HUNT, And That’s It Because Coronavirus Ruins...