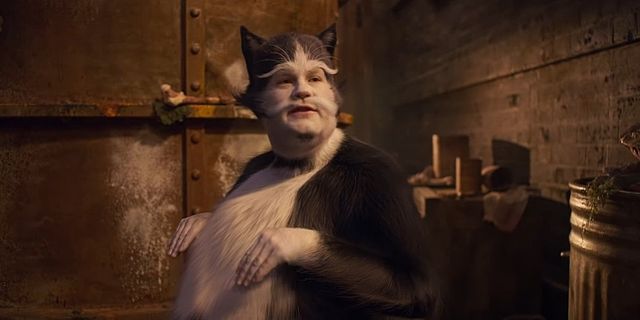 I’m breaking my promise to never cover the awful Razzie Awards for one reason, and one reason only. In this time of turmoil we all could use a little something that brings us all closer together, and that is in our mutual dislike of Cats. Tom Hooper’s embarrassing musical was top cat with 6 Razzies, including Worst Film of the Year.

Of course, it’s low hanging fruit to pick on Cats. Even the people who starred in it have had their fun at its expensive. That includes star James Corden, who came away with a Razzie “win” for Worst Support Actor for his role as a fat Jellicle cat Bustopher Jones. His co-star Rebel Wilson too the Razzie for Worst Supporting Actress for Gumbie Cat Jennyanydots. Worst On-Screen Duo, Worst Screenplay, and Worst Director are the other so-called accolades the film brought on itself.

Other movies earning the Razzies’ unwanted attention were Rambo: Last Blood, which took a couple for Worst Reckless Disregard for Human Life and Public Property, and Worst Prequel, Remake, Rip-off or Sequel. John Travolta quite rightly won Worst Actor for The Fanatic, as well as for his performance in Trading Point, a movie I swear to God I’ve never heard of. Hillary Duff deservedly won Worst Actress for the unforgivable Haunting of Sharon Tate.

In a world without Cats, I’d like to think ‘Sharon Tate‘ would’ve won Worst Picture, but the Razzies are really about dishonoring the worst. They’re about gauging the strongest social media reactions and by that measure Cats is the undisputed champion, a true Hall of Shamer.

‘Cats’ May Have Included CGI Buttholes At Some Point