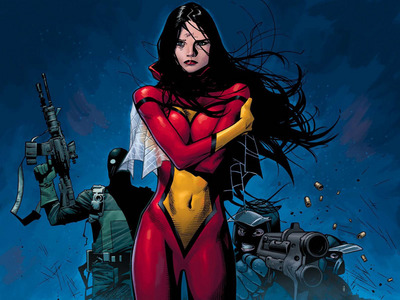 It’s pretty much universally accepted at this point that the MCU is about to get weird in phase 4, and since the roster is moving away from the OG’s it’s time to bring in some of the more awesome second and third tier characters. Rumors abound that the mystery film on Marvel’s slate for 2021 is going to be Spider-Woman, and really why not? Sure I see her as move of a Disney+ launch, or maybe even a Black Panther like introduction but I’m done questioning their possible motives. The honest truth is that none of us know what to expect after Dr. Strange in the Multiverse of Madness, it’s starting to seem more and more like that film is going to be a tonal shift in the MCU on par with Endgame. The bottom line is Marvel is looking to expand into a more diverse roster and Jessica Drew fits the bill perfectly. Fan site The Illuminerdi claims to have some inside studio information that has Marvel looking at Alicia Viklander to strap on the web-slingers for Spidey’s gender-swapped counterpart. While this is the very definition of a rumor, it’s one I can get on board with. Viklander, who seems to have somewhat gone silent after blowing up a few years ago with Ex Machina and Tomb Raider, would definitely fit the bill. She’s got plenty of talent as an actor and definitely doesn’t lack the physicality needed for the role. Throw all your grains of salt at this one, but we’ll be standing by in case a confirmation comes!

Final ‘Black Widow’ Trailer: The Avengers’ Superspy Returns Home To Confront Her Past