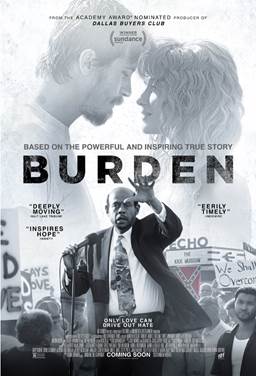 SYNOPSIS: Orphaned at a young age, Mike Burden (Garrett Hedlund) has spent years living on the margins of society under the spell of manipulative Ku Klux Klan leader Tom Griffin (Tom Wilkinson). Rising through the ranks of the hate group to the status of Grand Dragon, Mike has become one of Griffin’s most loyal lieutenants, and he proudly assists in the opening of a museum celebrating the Klan’s horrific legacy in the center of their small South Carolina town. But once the storefront is open for business, long-simmering racial tensions threaten to finally boil over.


Enter the idealistic Reverend David Kennedy (Academy Award®-winner Forest Whitaker), who vows to do everything in his power to maintain order—yet Kennedy’s inner resolve is tested once a former enemy comes to him seeking guidance. After falling in love with a courageous single-mother (Andrea Riseborough) and reconnecting with a high-school acquaintance (Usher Raymond), Mike ultimately chooses to abandon his long-held beliefs, leaving behind his violent past in the hopes of building a brighter future.


Soon, both Burden and Kennedy find themselves on a collision course with Griffin, who is determined to lure Mike back into the fold—or to see him punished for his betrayal. Penniless and desperate, Burden relies on Kennedy to help him escape a terrible fate. In the face of grave threats to himself and his family, the resolute Kennedy sets aside his own misgivings and bravely pursues a path toward peace, seeing in Mike a chance to save a lost soul and to heal his wounded community.


The screening takes place on Wednesday, February 26th at AMC Georgetown at 7:00pm. If you’d like to attend, simply register at the Gofobo ticketing site here. Please remember, all screenings are first come first served and you will need to arrive early to ensure seating. Enjoy the show!