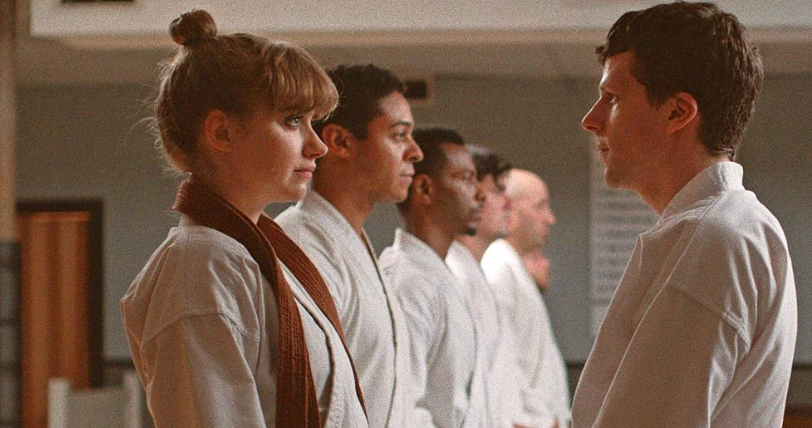 The Art of Self-Defense follows Casey (Jesse
Eisenberg), a mid-30s accountant that is just trying to keep to himself, not
bothering a soul. He floats through life as a meek and scared person, sitting
at a restaurant allowing people to openly mock him without even muttering a
word to defend himself. He is the weirdo at his office, awkwardly inserting
himself into conversations before quickly realizing that he doesn’t belong. One
evening Casey is brutally attacked by a motorcycle gang and beaten nearly to
death as he is walking back from buying dog food for his little Dachshund.
Unfortunately the assailants have bicycle helmets on, and Casey cannot identify
any of them, but these random beatings seem to be a recurring problem in the
area. Casey stumbles upon a Karate dojo and after observing a lesson, decides
that he is ready to try and learn Karate in an attempt to protect himself from
harm in the future. Casey is immediately enamored by the dojo’s Sensei
(Alessandro Nivola). Sensei is impressed with Casey and his progress and
quickly promotes him to a yellow belt, something Casey does not take lightly.
The other members of the dojo have a strange mix of being incredibly
aggressive, while still friendly and welcoming. It is a dynamic that Casey
struggles to understand at first but begins to become more comfortable with – especially his relationship with the only female at the dojo, a brown belt
named Anna (Imogen Poots). Karate begins to engulf Casey’s life – when he is
not at the dojo training, he is practicing moves in the mirror. Following Sensei’s
suggestions, Casey begins to change his mindset to go along with his training.
He starts becoming more assertive in all aspects of his everyday life – from
the the interactions he has with those around him to the genre of music he
listens to (a natural progression from adult contemporary to heavy metal).
Casey receives an invitation to join the night class from Sensei which opens
his eyes to the sinister underbelly of the dojo and the extreme levels of toxic masculinity present. The Art of Self-Defense is a dark comedy through and
through. Writer/Director Riley Stearns does a fantastic job setting a tone for
the film that enables humor to flow through it without having to blatantly slap
you in the face – and having an incredibly clever script doesn’t hurt either!
There are so many little nuggets throughout that were hysterical and presented in unique ways, which I really appreciated. The actors deliver many of their
lines in a monotone and emotionless fashion during The Art of Self-Defense
which even furthers the absurdity of their characters and what they are saying.
Nivola knocks this out of the park, with Sensei being chockfull of amazing
quotes that I will not soon forget. Stearns manages to weave together a strange
mix of comedy, action, and emotion – all while having most of the lines in the
film delivered without emotion – that creates a dark and hilarious film. There are certain aspects of The Art of Self-Defense that are truly
outlandish and on the verge of unbelievable, but don’t let that bother you. Let
yourself sit back and enjoy the world, and absurd characters, that Stearns
creates. While Nivola steals the show, Eisenberg also has a strong performance
and I enjoyed watching Casey’s transformation as the film progresses. I appreciated
Stearns work so much that I will be trying to get my hands on his first feature
length film, Faults, as soon as possible. The Art of Self-Defense
is funny, clever, and an enjoyable flick that I think you shouldn’t pass up –
not to mention we get a mini training montage, so what more could you ask for?
Rating: 4 out of 5